Home
Products
About Us
Factory Tour
Quality Control
Contact Us

We have received all the instruments, and will test them, for the moment we have very good feelings. Thank you.

I really would like to work with YUYANG, their professional service on the laboratory solution and reliable products help me win much market!

Nice cooperation! We appreciated for your company's kind support on our projects. Very good service.

I was set up your machine one week ago. İt’s good working. Thank you for all.

Quality is your factory culture, Quickly response is your core! Keep it and let YUYANG brand testing machine around the world.

There are seldom suppliers willing to do small spare parts for us, while YUYANG spends time with us, only for three burners, we appreciate them.

Summary
This rolling thin film overn is designed and made as per industrial standard T 0610-2011 Standard Test Method for Effect of Heat and Air on a Moving Film of Asphalt in JTG E20-2011 Standard Test Methods of Bitumen and Bituminous Mixtures for Highway Engineering.
It is suitable to determine mass loss of highway asphalt rolling thin film after heating, and the change of penetration, viscosity, ductility and breaking point of asphalt residue after the thin film has been heated, so as to estimate the aging performance of bitumen.
I. Main technical features
1. This RTFOT is composed of electric control component, working oven and mechanical drive. An illuminating light is equipped in the oven for convenient observation.
2. There is an air compressor in the oven to supply the air needed for the test. The air can be controlled by a flowmeter on the panel.
3. This rolling thin film oven test equipment adopts high precise temperature controller which can meet test requirements. 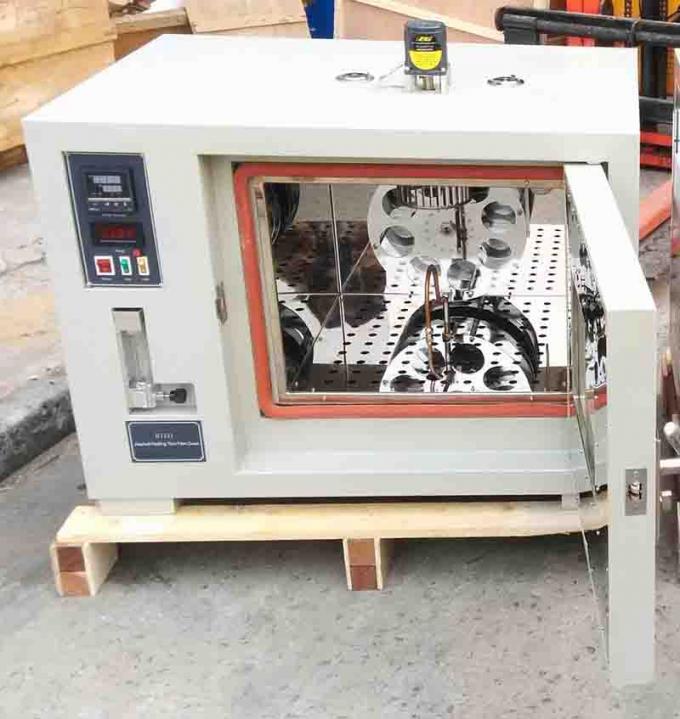